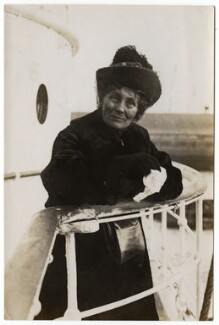 Today we mark 100 years since some British women got the vote in the UK. It is a milestone to celebrate but let us not forget that some other British women, in the Isle of Man, got the vote almost four decades earlier.

On January 31st, 1881, the Isle of Man, a British Crown Dependency, gave women who owned property the right to vote. Lydia Becker, a leader of the suffragette movement in Manchester had visited the island and gave a series of public lectures on votes for women the year before. In under six months, the obvious rationale of her arguments had been translated into Manx law. While it is barely mentioned in the UK today, the impact of that step on the votes for women movement in the UK cannot be underestimated. Sophia Goulden, the feminist and mother of Emmeline Pankhurst and Mary Clarke was born on and retired to the Isle of Man. It will not have been lost on her daughters that by the time she died in 1910, their mother did have the right to vote.

The original proposal for law reform on the Island was for universal suffrage – simply removing the word “male” from the proposed statute based on the “principle of justice that taxation and representation should go together.” This proposal was carried by a vote of 16 to 3 in the Manx House of Keys. But this was a step too far for Westminster, represented on the Island by the Governor, who insisted that it should be restricted to spinsters and widows who owned property in their own right.

Island communities are often maligned for being stuck in the past, remote and cut off from the world. But women’s suffrage in the Isle of Man is an example of the ability of small islands to take the lead globally in matters of social justice. Small communities can be slow to change on some fronts – the Isle of Man was famously slow to abolish corporal punishment and to decriminalise homosexuality and the current debate on reform of abortion legislation shows an urgent need for change. But they also have the ability to move much more swiftly than larger countries when they are inspired to do so.

It was interference from Westminster that prevented the Isle of Man from bringing votes to all women in 1881. That could be seen as a sign that such a step would have made it much harder to justify the refusal to give women the vote in the UK. But it also highlights the complex relationship between the UK and its crown dependencies and overseas territories. In general, at least in recent years, the UK has promoted the development of human rights and the rule of law in its overseas territories, but the constitutional, political and legal relationships are not necessarily clear and there is no reason to assume that the UK government will always be on the side of social justice. The UK is responsible for the international human rights obligations of its crown dependencies and overseas territories and therefore it is required to ensure that human rights standards are respected in them all. But the story of women’s suffrage in the Isle of Man highlights the importance of non-self-governing jurisdictions being free to make their own decisions where those decisions go above and beyond what is possible in the UK in advancing human rights and social justice.

The Isle of Man may have been the first jurisdiction in the world to give votes to women, but the fight for equal rights does not stop with the vote. Equality legislation was slow coming to the Island, in part perhaps because it is not formally a part of the European Union. And reform of abortion legislation is only now firmly on the agenda to bring the Island into the 21st Century in terms of women’s reproductive rights. But it was ahead of the curve in Britain introducing equal civil partnerships in 2016, a move that the UK looks set to follow after years of challenging the idea in the courts.

As the Island prepares to celebrate 150 years of votes for women over the next decade, it will be interesting to see if there are other areas of human rights and social justice where it can show itself to be a world leader. The ripple effect of bold changes in small islands can be felt across the globe – New Zealand was the next jurisdiction to give votes to women – islands should never underestimate their power to drive reform.